Author Profile in YOU Magazine, The Irish Mail

Posted by Mary on Monday 22 April 2013 in the Blog Category. 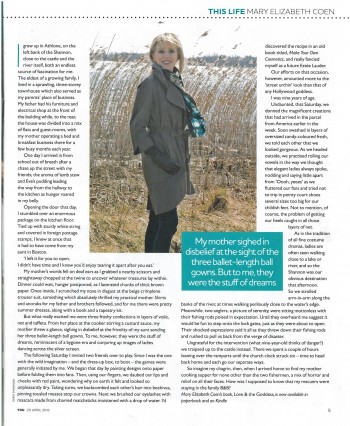 Mary Elizabeth Coen, YOU Magazine in The Irish Mail

I grew up in Athlone, on the left bank of the Shannon, close to the castle and the river itself, both an endless source of fascination for me. The eldest of a growing family, I lived in a sprawling, three-storey townhouse which also served as my parents’ place of business. My father had his furniture and electrical shop at the front of the building while, to the rear, the house was divided into a mix of flats and guest-rooms, with my mother operating a bed and breakfast business there for a few busy months each year.
One day I arrived in from school out of breath after a chase up the street with my friends; the aroma of lamb stew and Eve’s pudding leading the way from the hallway to the kitchen as hunger roared in my belly.
Opening the door that day, I stumbled over an enormous package on the kitchen floor. Tied up with sturdy white string and covered in foreign postage stamps, I knew at once that it had to have come from my aunt in Boston.
‘I left it for you to open. I didn’t have time and I knew you’d enjoy tearing it apart after you eat.’
My mother’s words fell on deaf ears as I grabbed a nearby scissors and straightaway chopped free the twine to unfold whatever treasures lay within. Dinner could wait, hunger postponed, as I lacerated chunks of thick brown paper.
Once inside, I scrunched my nose in disgust at the beige crimplene trouser suit, something which absolutely thrilled my practical mother. Shirts and anoraks for my father and brothers followed, and for me there were pretty summer dresses, along with a book and a tapestry kit.
But what really excited me were three frothy confections in layers of voile, net and taffeta. From her place at the cooker stirring a custard sauce, my mother threw a glance, sighing in disbelief at the frivolity of my aunt sending her three ballet-length ball gowns. To me, however, they were the stuff of dreams, reminiscent of a bygone era and conjuring up images of ladies dancing across the silver screen.
The following Saturday I invited two friends over to play. Since I was the one with the wild imagination – and the dress-up box, to boot – the games were generally initiated by me. We began that day by painting designs onto paper before folding them into fans. Then, using our fingers, we daubed our lips and cheeks with red paint, wondering why on earth it felt and looked so unpleasantly dry. Taking turns, we backcombed each other’s hair into beehives, pinning tousled messes atop our crowns. Next we brushed our eyelashes with mascara made from charred matchsticks moistened with a drop of water. I’d discovered the recipe in an old book titled, Make Your Own Cosmetics, and really fancied myself as a future Estee Lauder.
Our efforts on that occasion, however, amounted more to the ‘street urchin’ look than that of any Hollywood goddess.
I was nine years of age.
Undaunted, that Saturday, we donned the magnificent creations that had arrived in the parcel from America earlier in the week. Soon swathed in layers of oversized candy-coloured froth, we told each other that we looked gorgeous. As we headed outside, we practised rolling our vowels in the way we thought that elegant ladies always spoke, nodding and saying little apart from ‘Oooh, yeees’ as we fluttered our fans and tried not to trip in pointy court shoes several sizes too big for our childish feet. Not to mention, of course, the problem of getting our heels caught in all those layers of net.
As in the tradition of all fine costume dramas, ladies are often seen walking close to a lake or river, and so the Shannon was our obvious destination that afternoon. So we strolled arm-in-arm along the banks of the river, at times walking perilously close to the water’s edge. Meanwhile, two anglers, a picture of serenity, were sitting motionless with their fishing rods poised in expectation. Until they overheard me suggest it would be fun to step onto the lock gates, just as they were about to start opening. Their shocked expressions said it all as they threw down their fishing rods and rushed to pull us back from the verge of disaster.
Ungrateful for the intervention (what nine-year-old thinks of danger?) we traipsed up to the castle instead. There we spent a couple of hours leaning over the ramparts until the church clock struck six – time to head back home and each go our separate ways.
So imagine my chagrin, then, when I arrived home to find my mother cooking supper for none other than the two fishermen, a mix of horror and relief on all their faces. How was I supposed to know that my rescuers were staying in the family B&B?

*Mary Elizabeth Coen’s book, Love & the Goddess, is now available in paperback and on Kindle. 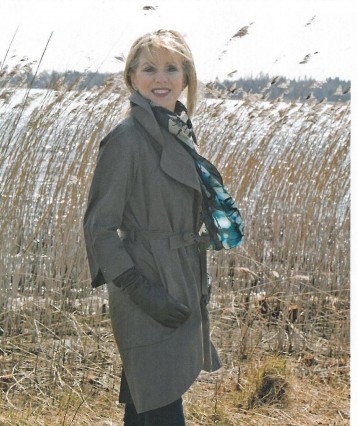 Photograph by Gerry Sanford for You Magazine, The Irish Mail