Posted by Mary on Monday 25 February 2013 in the Style Category.

First glance at the Oscar gowns this year and I thought BORING! We’ve seen it all before and in many ways I miss the frock horrors of old, before the days of celebrity stylists and designers tripping over each other in an attempt at offering the biggest possible bribes to Oscar nominees. It’s all become as boring as political correctness. Though the frocks may be works of art, with hours of exquisite craftsmanship in the finest ateliers, if they do not suit the wearer then they are not winners. As Coco Chanel said ‘If a woman is well dressed you notice the woman, not the dress.’

On second glance however I spotted some beauties, which I include here: 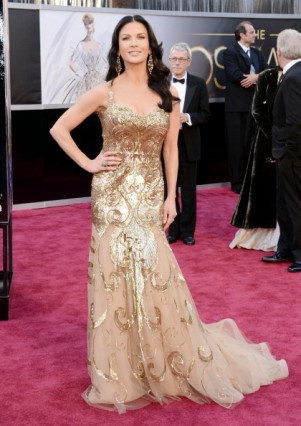 Catherine Zeta-Jones in gold Zuhair Murad  (Photo by Jason Merritt/Getty Images) Catherine totally rocks the Goddess vibe! With glowing skin and womanly cuves, this is pure Aphrodite and one of my winners on Oscar night. 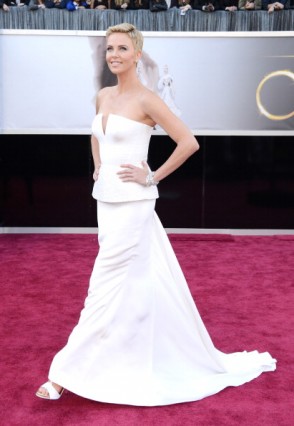 Charliez Theron in structured bodice over full skirt by Christian Dior(Photo by Jason Merritt/Getty Images). Where some blondes can’t wear white, Charlize carries it off, with her cute pixie crop and glowing skin. 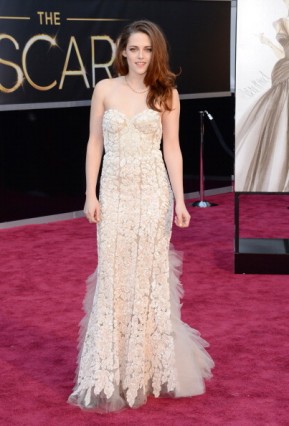 The workmanship on this gown may be exquisite but it doesn’t suit Kristen Stewart’s complexion, age, figure or posture. I’d prefer to see her in something with slightly more street cred – maybe a ballgown version of biker gear – lace and leather in navy blue rather than black. Any designer willing to take her on? 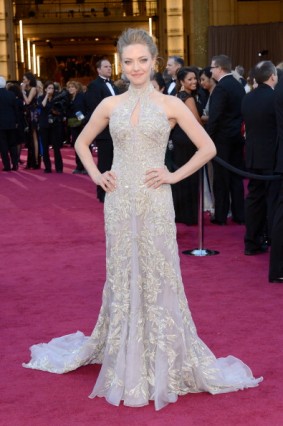 My verdict; – It’s a stunningly executed dress but the colour does nothing for her. This is a dress she could wear in 20 years time. While she’s young, please please give her something modern and flirty. 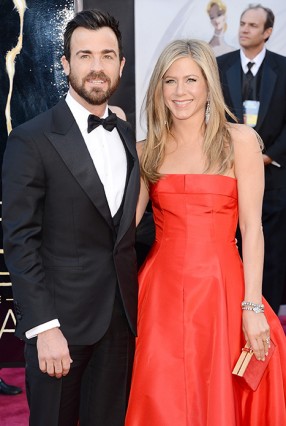 Jennifer Aniston in red Valentino with Justin Theroux. Jen totally nails modernity in this apparently simple yet stunning dress. Love gives her a radiance and everyone agrees they are the cutest couple in Hollywood.  Some of the younger stars need to start taking style tips from Jen who always looks natural and unfussy – not an easy feat on Oscar night. 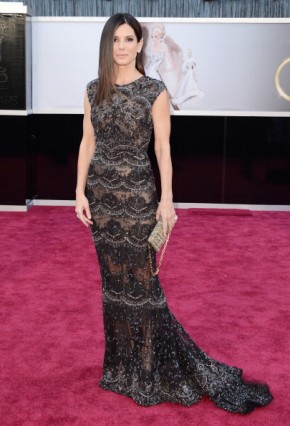 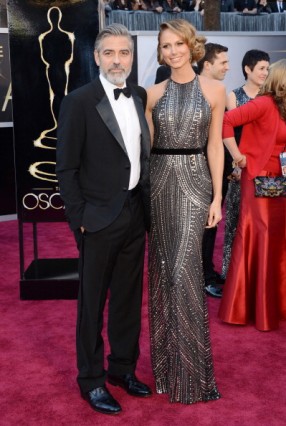 George Clooney and Stacy Keibler. (Photo by Jason Merritt/Getty Images) George donned a Giorgio Armani suit, while his paramour wore a Naeem Khan dress.  I’m not mad about the beard as I feel it creates an optical effect of shortening the face. For exactly the same reason, I’m not keen on the belt around her dress – it cuts an otherwise beautiful gown in half. 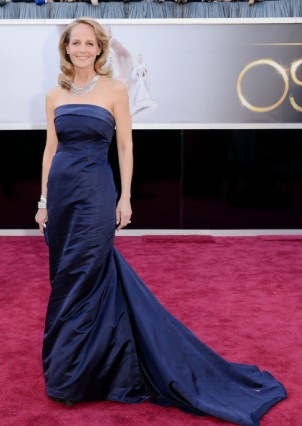 Helen Hunt  arrives in a H& M dress, having shunned designer offers (Photo by Jason Merritt/Getty Images). The navy blue strapless dress, which appeared not to have been steamed or ironed, is from the fast fashion chain’s eco-friendly Conscious collection, and is totally green. The borrowed jewels however were worth $700,000. We forgive you Helen – at 49 you look amazing and really rock the Goddess vibe! 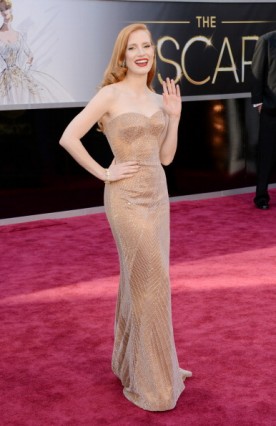 Jessica Chastain in a strapless golden Armani Prive (Photo by Jason Merritt/Getty Images). Again, I believe the pale coloured gowns are not good with pale hair and skin. Great figure, skin and posture and classy yes, but boring on a young woman. 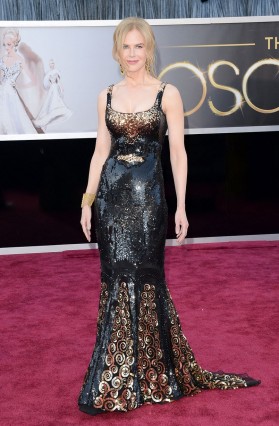 Nicole Kidman in a diaphanous L’Wren Scott dress. ( picture Getty images) I love this dress on Nicole, although some fashion insiders are slating it. Nicole looks healthy and natural (leaving her skinny, botoxed days behind). I’m also extremely biased here as the gold swirls on the bottom hint at the ‘triskelion’ symbol –  a powerful emblem of the triple goddess. Yes Nicole – you too rock the Goddess vibe! 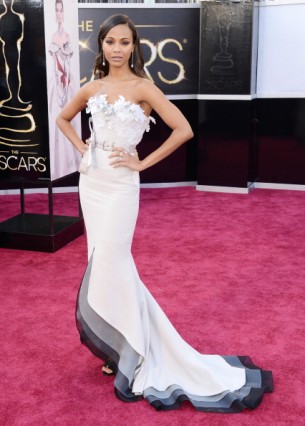 Zoe Saldana in  Alexis Mabille Couture dress(Photo by Jason Merritt/Getty Images). Zoe can wear pale because she  is dark haired with sallow skin. This gown is perfect for her petite frame, the train lending her an illusion of being taller. Very graceful and  atmospheric. 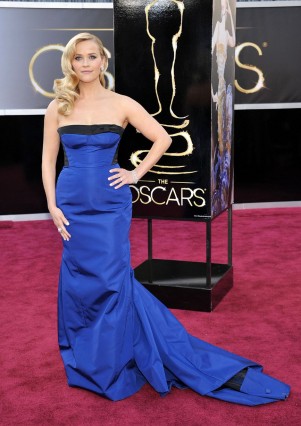 Reese Witherspoon in royal blue Valentiono gown. ( picture by Getty images) What can I say?  Reese looks beautiful but we’ve seen this look before. The black side panels are clever for optically slimming the waist but apart form that I’m quite sure I’ve seen something similar among debs dresses. I’m sure some of you have  too. We want to be wowed by Hollywood and top designers like Valentiono whose couture creations cost a fortune! 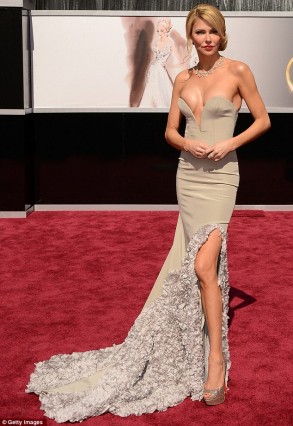 And finally a complete lack of political correctness in Brandi Glanville’s dress ( picture by Getty images) – no stylist or designer involved here.

The Real Housewives Of Beverly Hills star Brandi Glanville left fashion commentators searching for the appropriate response in a plunging gown which she reportedly designed herself. What do you think?

Who are the winners? Are the older stars winning here? Feel free to add your comments below.