Posted by Mary on Thursday 08 March 2012 in the Mythology Category. 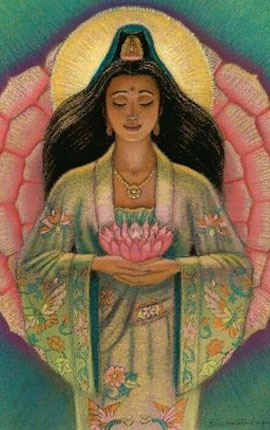 Have you noticed there seems to be a growing interest in mythology? There may be countless reasons, including a hankering for nostalgia as witnessed in the revival of old cookery recipes and vintage clothing. More of us may wish to reconnect with nature and simplicity as our ancestors did. As we live in uncertain times, we look to older civilizations in the hope of ascertaining wisdom.

Mythology has been around for thousands of years in almost every ancient civilization on Earth. The Gods and Goddesses of the myths represented the eternally male and feminine qualities that pattern our lives. Each of the myths is different, with each God and Goddess having distinctly different traits, both positive and negative. Human nature hasn’t changed much despite advances in technology and education.

In olden times these stories were a source of entertainment just as movies and books are for us today. Stories filled with emotion, heartache, lost innocence, revenge and jealousy helped to shape the values of individual societies by teaching what is normal, acceptable and likely to be rewarded or punished. Above all else the myths shed light on the human condition and our struggle to be whole in mind, body and spirit.

Through the Goddess quiz, you can acquaint yourself with the personality traits of seven of the main Greek Goddesses. Assuming that not all of you are experts on mythology, I intend to gradually introduce you to Goddesses from other traditions in this section.

One of my favourite Goddess myths comes from the East.  The legend of Quan Yin, Buddhist Goddess of compassion as depicted here in Sue Halstenberg’s beautiful painting. 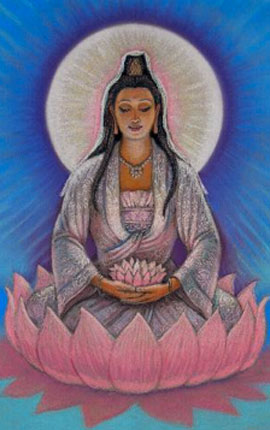 She is often shown sitting or standing on a lotus flower, which is one of the main symbols of Buddhist purity, since this flower grows out of mud. The meaning is that our hearts should always be pure like the lotus flower, even when we encounter difficult people in our lives.

Her story is not unlike certain fairy tales and has similarities with the story of Siddhartha, the founder of Buddhism in that she was the daughter of a king. It has parallels with the story of Jesus in her role as sacrificial daughter, wishing to save mankind from suffering.

The legend of Quan Yin, Buddhist Goddess of Compassion.

In 7th century China, a king had three daughters, the youngest named Miao-Shan. At Miao-Shan’s birth, the earth shook as flowers blossomed and their fragrance permeated the land. Many who saw the child claimed they witnessed the marks of a holy incarnation on her body. In Buddhism such a person is called a Bodhishattva.

While the king and queen were amazed by this blessing, they saw little value in a child who appeared pure and kind. When Miao-Shan reached her teens, the king decided she should marry for political reasons. Replying to her father’s request, she said she would only marry if she could help alleviate the suffering of all mankind.

The king was outraged by her devotion to helping others. Her mother, the queen and her two sisters forced her to slave away at menial tasks. Finally, in desperation, the king decided to let her pursue her religious calling at a monastery, but ordered the nuns there to treat her so badly she would change her mind. She was forced to scrub floors and collect wood. Wishing to give her an impossible task, they ordered her to plant a garden on barren ground around the monastery. Much to everyone’s amazement, the garden flourished even in winter and a spring welled up keeping it watered.

Incensed, the king wanting to kill Miao-Shan, sent his henchmen to fetch her at the monastery. As they arrived, a spirit appeared out of a fog of clouds and carried her away to safety on a remote island. There, she lived alone for many years, pursuing a life of spiritual devotion.

Several years later, her father became seriously ill and was unable to sleep or eat; his doctors believed he would certainly die soon. As he was about to give one last breath, a monk came to visit. The holy man told the king he could cure the monarch, but he would have to grind up the arms and eyes of one free from hatred to make this medicine. The king thought this was impossible, but the monk assured him that there was a Bodhisattva living in the king’s domain who would gladly sacrifice her body parts if asked.

An envoy from the king went in search of the the unknown bodhisattva. When the envoy made the request, Miao-Shan gladly cut out her eyes and severed her arms. The envoy returned and the monk made the medicine. The Monarch instantly recovered and thanked the monk who reprimanded him. “You should thank the one who gave her eyes and arms.”  the monk said before disappearing. The king, believing this was a sign of divine intervention, ordered a coach  and headed off with his family to find and thank the unknown bodhisattva.

When the royal family arrived they realized it is was their daughter, Miao-Shan, who had made the sacrifice. The girl spoke, “Mindful of my father’s love, I have repaid him with my eyes and arms.” With eyes full of tears and hearts full of shame, the family gathered to hug Miao-Shan. As they did so, clouds formed around the girl. The earth trembled, flowers bloomed and a holy image of the Thousand Eyes and Thousand Arms appeared in the sky.

And then, the bodhisattva disappeared from this world. To honor Miao-Shan the royal family built a shrine on the spot, which is known as The Fragrant Mountain.

BODHISATTVA literally means “enlightened being”, a soul who through compassion and altruism, has earned the right to leave this world of suffering and enter nirvana, but has chosen instead to re-incarnate on Earth and help others until all beings are enlightened. The Dali Lama and Thich Nhat Hanh are acknowledged as Bodhisattvas.

How are we familiar with the archetype of Quan Yin?

In Hans Christian Anderson’s story ‘Thumbelina’ we are introduced to a flower child who appears to resemble Quan Yin. In another of Anderson’s myths ‘The story of a mother’ we read of a mother who sacrifices her body parts in the hope of saving her baby son. Quan Yin has many similarities with the Celtic Goddess Brigid and the Hindu Goddess Tara. In appearance and character traits she is similar to the virgin mother of Christianity.

In her role as daughter tending the earth she resembles the maiden Goddess Persephone (of Greek mythology), yet she assumes the role of mother Goddess in her spirit of compassion and unconditional love. Her wisdom and devotion to spirituality are attributes of the crone Goddess, so in many respects she embodies the strong archetype of the triple Goddess. Through her suffering she never identifies with a victim mentality, instead she rises above it. In this way she represents a very enduring feminine archetype.

In Buddhism there are no Gods to worship since the path of enlightenment is an individual path of wisdom, ethical conduct and mental development. Though it may be helpful to visualise Quan Yin in human form, it is more accurate to say she represents the energy of compassion and unconditional love. In this way many devotees call upon the feminine energy of Quan Yin when reciting mantras or during mediation.