Posted by Mary on Saturday 07 September 2013 in the Mythology Category. 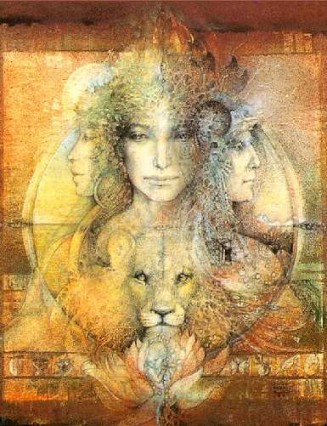 The Triple goddess myth is one of the most enduring and fascinating of the Greek myths. Anyone wishing to understand female archetypes will be drawn to this story. It’s the reason I wanted to include references to it in my debut novel ‘Love & the Goddess’.

The three goddesses Persephone, Demeter and Hekate are the original triple goddess, each an aspect of the one great goddess:- Persephone the maiden, Demeter the mother and Hekate the crone or older goddess. They also represent the three phases of a woman’s life and are regarded as archetypes common to all women.

This is a simplified verion of their story: –

Demeter, goddess of the harvest was respected as an earlier version of mother earth; – As a nurturing mother, she generously tended to the earth in order that we mortals could enjoy the benefits of her rich harvest all year round. Demeter’s daughter Persephone enjoyed helping her mother and often accompanied her as she worked in managing the soil, crops and nature itself.

As Persephone matured, she grew into a beautiful young woman, catching the eye of would be suitors. One day while helping her mother, she wandered off into a meadow to pick some wild flowers. Distracted by the colours and beauty of the flowers, she did not notice the ground abruptly opening behind her. Hades, god of the underworld had been watching for an opportunity to seize her for his bride. Out of  a hole in the earth he sprang from his chariot to snatch her, slinging her over his shoulder to drag her down into the underworld, land of the dead. After they disappeared the hole covered over leaving no trace for anyone to see where Hades had emerged from. 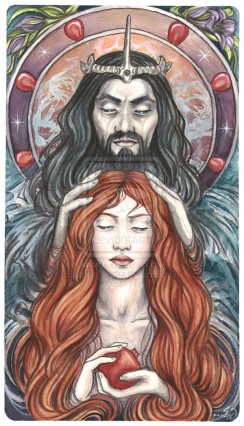 The original Beatuy & the Beast – Hades and Persephone

Distraught when she could not find her daughter, Demeter wandered throughout the earth trying to find out what had happened to her child. Since Zeus king of the Gods was the father of Persephone she implored him to assist her, but he would not interfere since he did not wish to meddle in the affairs of Hades, who was also his brother.

Demeter met the crone Hekate, goddess of the dark side of the moon and patroness of witches. Hekate told her that she had heard Persephone calling out one day, and that Helios the sun god confirmed he had seen Persephone’s abduction by Hades. Demeter went off to complain to Zeus who refused to intervene, so Demeter withdrew from her role as goddess. Without her, no crops could grow and the resulting famine threatened the extinction of the human race. 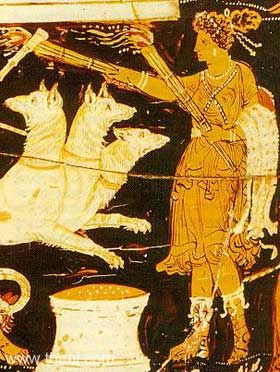 The goddess Heckate from an ancient Greek image.

Eventually Zeus declared that Hades would have to let Persephone go. Hades argued that if she had eaten anything while in the underworld she would not be able to return to earth. Since Persephone had eaten six pomegranate seeds, it was agreed that she would have to spend six month every year in the underworld as the bride of Hades, but she could return to earth for the remaining half of the year. While Persephone is in the underworld, her mother mourns and refuses to allow crops to grow until she welcomes her daughter back again. Such is the explanation for the lack of growth we encounter in the earth during Autumn and Winter. In contrast Spring and Summer see a time of renewal when Persephone returns to be with her mother.

For more information read my blog  Goddess in the Greek Pantheon: –  http://tinyurl.com/m4svwbo 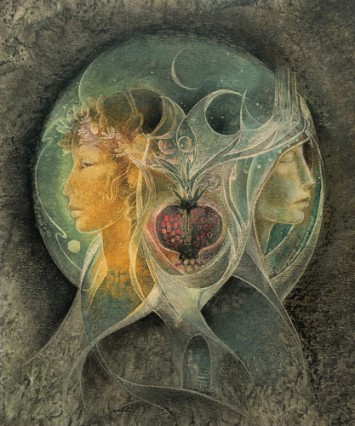 The story is simple yet the complexity lies in the character of each goddess. Persephone represents youth and innocence on the one hand (our inner child), yet there is a suggestion of lost innocence in her abduction – and some would say the ‘rape’ by Hades. Demeter represents the Mother archetype, nurturing and caring. . Hekate represents the older wiser woman with the alchemical power to transform the trials of life, grief and sorrow into the gold of wisdom.

All three goddesses of the Greek Pantheon have extremely strong connections to the three worlds; – the underworld is observed in  the person of Hades and the themes of sex, loss and death. Metaphors linking them to Earth are maternal values, nurturing and the Earth itself. Their connection to the metaphysical or upper world lies in the themes of rebirth, healing/transformation, magic, dreams and prophecy figuring prominently in their myths.

Persephone, Demeter and Hekate are shining examples of the true nature of the great Goddess, understanding the light and dark elements of life and death. They are independent and extremely powerful. We, as women all embody the maiden, mother and crone.

Take the Goddess quiz to find out your prominent archetype:- http://tinyurl.com/k57lktz

I welcome your comments – feel free to post below.